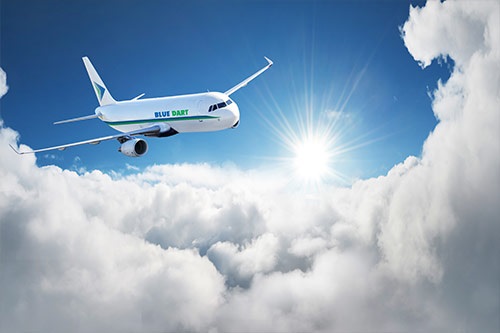 Blue Dart Aviation Ltd. was incorporated in May 1994 as a 100% subsidiary of Blue Dart Express Limited, and launched its operations with a fleet of 2 Boeing 737-200 freighters on the 17th June 1996. Blue Dart Aviation Ltd. was created primarily to support the growing demands of Blue Dart Express Ltd. In an express industry where growth, year over year, consistently exceeded 35%, the management viewed the delivery capabilities of the domestic airlines inadequate and a limitation to the explosive growth of air express.

The restricted day flights and capacities oriented to passenger requirements were not consonant with the demands of the express market, which is committed to morning deliveries that rely on guaranteed space and late night operations. Taking a cue from the enormous success of the U.S. express industry, which started with a 4% share in 1977, averaged a compounded annual growth rate of 25% and progressed to claim close to 60% of the U.S. market, Blue Dart Express Ltd. made a path-breaking decision to create its own infrastructure and buy its own aircraft. It set up the first domestic freighter operations in India.

The night operations were designed to meet the specific needs of the business community as they focused on late night cut-offs and early morning deliveries. Shipments originating from a city at the end of the business day could arrive before the start of the next business day at their destinations. Customers could now rely on air capacity that was focused to service business needs and not passenger travel schedules.

Today, Blue Dart Aviation has a fleet of six Boeing 757, providing a network payload of 504 tonnes across 74 route connections each night.

Blue Dart Aviation Ltd. has many firsts to its credit: